Resting on the southernmost point of the Rio de la Plata, Uruguay’s capital is a charming city. Tour the Establecimiento Juanico winery with buildings dating back to 1849. Wander the Plaza Independencia or take in the scenery at Estancia La Rabida.

If you want to see wildlife, go to the Punta Tombo Nature Reserve. Puerto Madryn is a gateway to remote wildlife preserves and Argentine patagonia. Visit the Paleontology Museum in the Chubut Valley.

From the original name “Sandy Point,” this southernmost capital city in Chile had its humble beginnings as sparse penal colony near the Straits of Magellan. Today, Punta Arenas is regarded as a geopolitical point of interest given its strategic location as a gateway to the Antarctic Peninsula.

Situated off the coast of Antarctica, Elephant Island is named after the elephant seals that populate it and due to the island being shaped like an elephant head. Rugged mountains, glistening sheets of ice and unique wildlife add to the mystique of this remote destination. Despite its seemingly unforgiving, yet hauntingly beautiful landscape, legions of tuxedoed-looking penguins waddle across the rocky terrain while giant elephant seals lounge on its shores.

Arrive to the capital of the Falkland Islands, also known as Port Stanley and you’ll find a coastal town worthy of a jigsaw puzzle. This quaint city is home to a small population (so few are the residents that the town’s only jail can only hold thirteen people.) But it’s a place big on things to see and do. Whether you visit the Anglican Christ Church Cathedral, the southernmost cathedral in the world, or look for penguins.

Health and safety protocols are subject to change by local authorities and may vary in certain destinations.

For the most updated information, please continue to visit this page NCL Sail Safe 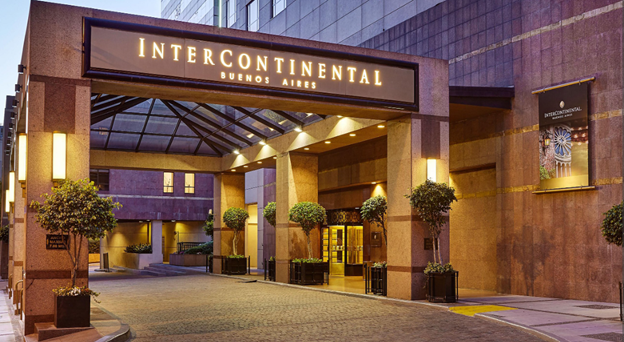 This Buenos Aires Hotel represents the sophisticated and classic style of this historical city. Enjoy your holidays with the beautifully designed suites, indoor pool, and onsite spa. Conveniently located near major cultural attractions such as museums, theatres, traditional coffee shops and famous neighborhoods such as San Telmo and Florida Avenue, this luxurious hotel will let you experience the authentic Argentina.

*Rates and availability are subject to change. Book early to avoid disappointment.

Pre-Cruise Get Together:
If you are staying at the Intercontinental Buenos Aires or will be in the area the night prior to the cruise, you are invited to join us for a pre-cruise get-together! This is a great way to get the party started and meet your cruise directors and others in the group who have arrived early for the cruise. Meet us in the Lobby Bar, at the hotel, 7:00pm the evening before the cruise.

Each cruise generally has one or two formal nights on-board the ship where passengers get decked out in party dresses, evening gowns, suits or tuxedos. Don’t forget to pack your special outfits for the SinglesCruise.com. A list of theme nights will be available here approximately 60 days prior to departure. The majority of guests dress up in theme, however, you are welcome to come to the party even if you choose not to dress up in the suggested attire.

On each cruise, you will receive an agenda packed with hosted activities and events you can join throughout the week to meet and socialize with new single friends. You can participate in as many events as you like – it’s your vacation so you decide! This will list theme nights, cocktail parties, dress code, activities and ports of call.

PLEASE PRINT this document and keep it on you at all times so you know where our group will be throughout the sailing. Thank you.

A link to your SinglesMingles activity guide will be provided in this section approximately 5-7 days prior to departure.

Tours provide an exciting way to explore and experience the exciting ports you are visiting while getting to know others in the singles cruise group. At Singles Cruise, we keep the fun momentum going by recommending an exciting shore excursion per port to give you the opportunity to be with other singles in your group. These tours are hosted by the vendor and are guaranteed to get you back to the ship for a timely departure.

You’re invited to join our private Facebook Group – exclusively for booked guests on this sailing! Please do not forward this private link to other friends. This is a great place to chat with others who will be cruising with you and share your photos from the cruise. We will maintain the group for 2 weeks after disembarkation.

Important Notes: Access to this page is a privilege, not a right. We may delete posts and revoke access to anyone that violates our terms of use. If your Facebook name is not your legal booking name you must email Cruises@SinglesCruise.com with legal name, sail date, Facebook name and wait 72 hours for approval.

The following posts are not acceptable:

*Facebook is independent of SinglesCruise.com and your participation in our group may show on your profile.